How can we help you today?

You are here:
< Back

This article describes the Delegation Setup steps for ADFS/SAML to function properly with any back-end File and DFS Servers in Active Directory. When file shares are located on a different server from the MyWorkDrive Server (MWD), will be reached through DFS, or users will be authenticated using ADFS/SAML, to properly pass user tokens to back end file shares it is required that the MyWorkDrive Server is trusted by any File Servers and DFS Servers for delegation.

New! As of MyWorkDrive server 6.3, built in scripts will audit to see if delegation is enabled and offer to set delegation for you directly from MyWorkDrive.

This audit and offer to fix is available on both the shares tab and in the new Health Dashboard (also a new feature of 6.3)

On the list of shares, you may note a warning icon that delegation is required, but that is is not correctly set for a given share or shares.

Clicking to edit the share will show both a delegation warning AND a button prompting you Add Delgation. Clicking the “Add Delegation” button will display a message about account requirements – you must be logged in to MyWorkDrive as a Domain Administrator to use the automated delegation feature. If the account you administer MyWorkDrive with is not a domain administrator, you can continue enabling delegation with one of the steps outlined below. We strongly recommend you DO NOT SELECT the option which says “Trust this computer for delegation to any servers (Kerberos only).” We strongly advocate you take a Least Privileged Access approach by specifying the servers and services as described above. You can read more about securing your active directory and delgation risks on Petri.com and ADSecurity.org 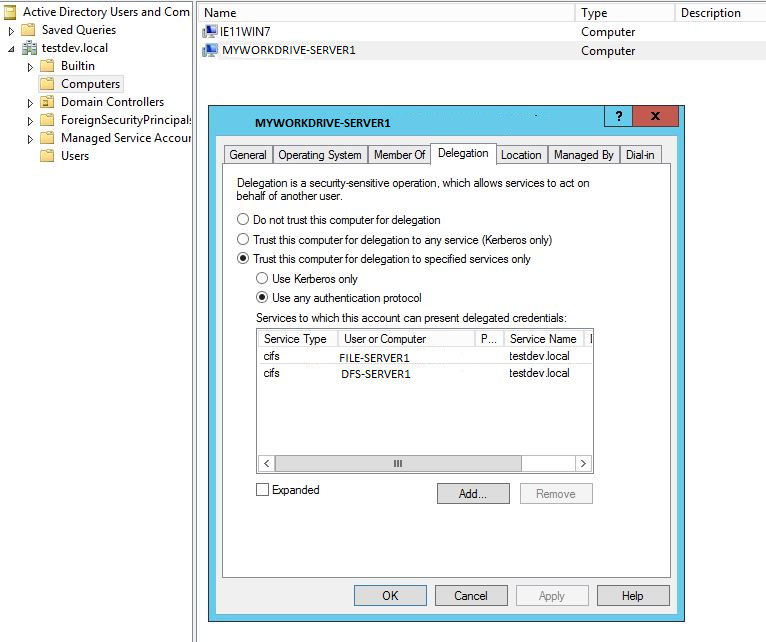 It is also possible to assign delegation contstrained to CIFS via Powershell, however using the GUI method through ADUC is recommended.

To do it through Powershell, you must specify a list of the FILESERVER’s service principal names (SPNs) in the MyWorkDrive Server(s) account(s).

To obtain the list of SPNs, you can use the Get-ADComputer cmdlet and display the servicePrincipalName property of the FILESERVER

To test what delegation exists using Powershell, this command will give you a list of the file servers which trust your MyWorkDrive server for delegation.

Powershell Configuration Steps for Server 2012 domains or higher are located in Microsoft’s article on how to enable Kerberos constrained delegation (KCD) on a managed domain and How to configure computer delegation with powershell.

An example MyWorkDrive Server command for a File Server and MyWorkDrive server is as follows:

Multiple Domains where MyWorkDrive Server, Users or Resources are in different domains:

When you are using DFS with SSO and MyWorkDrive, you must setup Delegation for the MyWorkDrive server for both the DFS computers AND the file share servers.

IE, if you have the following servers When you have successfully completed our setup guide to using Azure Files with MyWorkDrive, your Azure Files Storage Account will be a domain member. That domain member needs to be added to Delegation for the MyWorkDrive server in order for SSO to properly present that drive as a share to users. If your shares are showing up blank when users login via SSO, it is likely that Delegation is not setup correctly. If you believe you have correctly setup Delegation via KCD or Active Directory, you may use Powershell to test if the file share server/appliance is correctly accepting delegation. This will tell you if the logged in user can access files and folders on the delegated file share.

You can use a very simple Powershell script to test if Delegation is set correctly, using a technique knows as the “Double Hop”. Additional information about this test can be found at https://4sysops.com/archives/solve-the-powershell-multi-hop-problem-without-using-credssp/ To conduct this test, you will need 3 machines on your active directory

You’ll also need to know the share path of a share on the file server which has files in it, which the logged-in user can access. The powershell command is Invoke-Command -ComputerName $MyWorkDriveServerName -ScriptBlock {Get-ChildItem -Path \\$FileServer\ShareName } You’ll replace $MyWorkDriveServerName with the network name of your MyWorkDrive server You’ll replace $FileServer\ShareName with the file server and share you’re wanting to test. The share should have files in it, which you expect the user to have access to. And run the command from the Client workstation Example In our example, we are testing delegation to a Linux Samba Share from two different MyWorkDrive Servers. One MyWorkDrive server has delegation set, the other does not. We are testing from a Windows 10 client on the domain. Delegation Not Setup In this test, we will test delegation on a server where we intentionally did not setup delegation and expect an error.

Run Powershell on the Windows 10 domain member and execute the following command Invoke-Command -ComputerName mwf-scott6 -ScriptBlock {Get-ChildItem -Path \\ubuntu-samba\everyone } The results we get are: An error that the file path does not exist. Delegation did not work and our user was not able to access the share.

In this scenario, the share will show up blank when the user logs in to MyWorkDrive via SSO. This is the expected outcome as we did not setup delegation. It may also indicate that your File Server/Appliance is not accepting delegation, if setup correctly. Delegation Setup In this test, we will test delegation on a server where delegation is setup correctly

Run Powershell on the Windows 10 domain member and execute the following command Invoke-Command -ComputerName mwf-scott5 -ScriptBlock {Get-ChildItem -Path \\ubuntu-samba\everyone } The results we get are: A list of files and folders in the directory. Delegation did work, and our user was able to access the share. Patches released by Microsoft during November 2021’s Patch Tuesday on 9 November cause blank shares on login with SSO in a simliar way to not correctly enabling delegation. The issue was resolved with patches in late November, and finally fixed in the December and January Roll Ups.

As of mid 2022, no further cases of this should be presenting, as those updates are no longer relevant.

We include this information for archival purposes

If Logins suddenly appear blank on an existing MyWorkDrive installation which previously worked fine, you need to remidate the flawed patch, see this article for details.

If you are setting up SSO for the first time on your MyWorkDrive server, please see the article for details about applying the fix to your domain controllers, in addition to configuring delegation as described below.
The fix for the patch supplied via Windows Update must be manually applied. Without adding the fix for the Windows Update patch, logins will result in blank shares.